I often get asked why I always use Business Intelligence Development Studio (BIDS) instead of Report Builder (RB), so this blog post will help to identify some of the reasons why I prefer BIDS to RB.

If you are creating a lot of reports and want to keep them organized then I recommend BIDS. However, if you are only going to create a few reports, then you may want to go with RB as it has a closer look and feel to other Microsoft Office products like Word.

The following table gives you a list of BIDS and RB versions that are compatible with each SQL version.

You can quickly see from the table above that if you want to make a report that works with all versions of SQL (and Configuration Manager), you will need to user either BIDS 2005 or RB 1.0. It should also be noted that both BIDS and RB have no license requirements, at least as far as I am aware.

I recommend that you install the highest version of BIDS for the version(s) of SQL / SCCM you plan to support. In my case it is BIDS 2005 because I still do a lot of work with SCCM 2007 / SQL 2005. 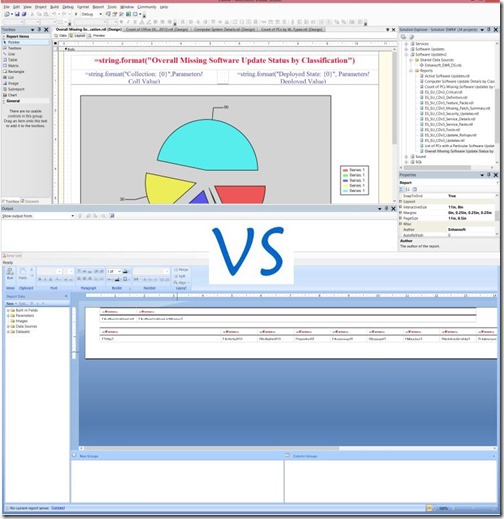