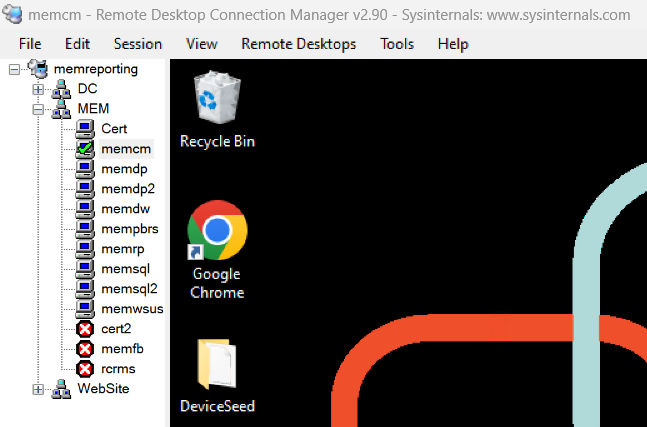 As a Microsoft Configuration Manager (SCCM / ConfigMgr / MCM) admin, I spend my time switching between differ servers. Over the years, I have come to LOVE Remote Desktop Connection Manager (RDCM), which is one of the Sysinternals tools! Recently I was showing a team mate, how to troubleshoot an issue. They asked, what is this tool am I using to Remote Control each of the server? I told them RDCM and they said what is that? This led down the road of installing on it on their computer and a quick overview. They loved it too. They told someone else at the office about it and they love it. I’m surprised about is how many people don’t know about RDCM!

This article is to expose more people to RDCM and show a few of the options that you can used. This includes things, like group servers together, to saving your user id and password, etc.

As you can see from the screenshot that I am connected to three servers (cert, memcm and memdp) at one time. Additionally, RDCM has many features many of them mirror what you can do within RDC but it also allows you to organize computers into groups. As you can see, I have created three groups based on different functions that I used. This allows you to keep organized.

One of the other features, that I Love is if you close RDCM and it had active connection. RDCM will remember this and prompt to open those connections again! This is good at reminding me what I was working on when I walked away from my computer.

Look I could go thru each option that RDCM has be that will make a long and boring article. Instead, I will suggest that you take 15 minutes and explorer the options! You can also watch the accompanying video as it will quick show a few cool features.

Where do you get RDCM?

You can download RDCM directly from Microsoft’s website. Remote Desktop Connection Manager – Windows Sysinternals | Microsoft Learn But how do you install it? There is no trick to just extract the executable to where ever you like, then run it.

Here is one option that I wrote a while back on RDCM. In this article I show you how you can use RDCM to connect to servers across a proxy server, read isolated server, using Port forwarding. If that is something that you need, check out Remote Desktop Connection Manager and Proxy Environments