Similar to most Microsoft MVPs and other senior IT consultants, I have a Hyper-V lab to simulate client environments. This is also where I test out the latest versions of System Center Configuration Manager (SCCM). I learned the hard way that you need to back-up your labs, so this is my story about how I came to use Altaro VM Backup and what I think about the latest version, 7.6.

For the longest time, I never bothered to back up my lab. It’s sort of funny that I didn’t back it up because at a previous job that was one of my responsibilities, but I thought there was little point in doing so because I could rebuild it quickly.
Then one day I discovered a RAID issue with one of the servers. Grrrr…. The timing couldn’t have been worse! I was working on a big project and I needed to get things done. Obviously, I wasn’t happy, but as soon as time permitted, I looked for a backup solution. Luckily my friend Niall Brady @ncbrady pointed me to Altaro VM Backup. Finally, with the help of QNAP’s Network Attached Storage (NAS) and Altaro VM Backup, I was able to get my Hyper-V lab backed-up. 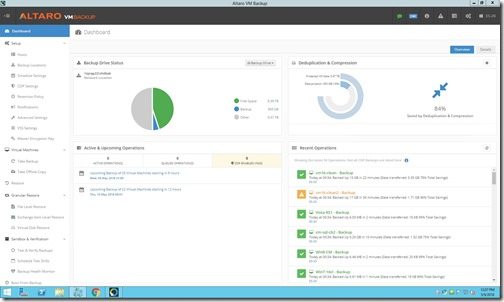 When I first started using Altaro VM Backup, I never backed-up my virtual machines (VMs) during the day because I found that the process produced Disk Queue Lengths of 50 waiting items! Disk IO is the number one killer of VM performance, so performing a backup during the day meant that my server was so slow that it was unusable.
In order to mitigate this problem, I scheduled the Altaro VM Backup to occur at midnight. Usually at that time I didn’t have to worry about the VMs being in use and if they were then it was a sign to stop working and to go to bed.
Unfortunately, I was finding that the backups were NOT completed by the time I got back into the office the next morning. I was trying to make some adjustments when I heard from Altaro that there was a new version of the backup software!
After installing the latest version and seeing it in action, I thought Altaro deserved a shout out! Good Job!! 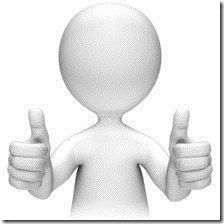 As of this writing, I upgraded one of my two Hyper-V servers to the latest Altaro VM Backup software.
The new multi-threaded backup truly cut down on the backup time. The backup now takes under an hour for 47 VMs! Most importantly, the Disk Queue Length never exceeds 10. This means that I don’t even know when the backup is happening! I’m so impressed.

I still find the interface challenging. I don’t like having to set the location in one node and then having to schedule the backup in another node by dragging and dropping the schedule. It’s also difficult for me to see which VMs are in what schedule. When I deleted a VM from Hyper-V, it wasn’t flagged as being deleted, but I still received error messages every time I tried to back it up. When you add a new VM, you must instruct Altaro VM Backup to back it up because there isn’t a default option to backup new VMs. Having said all that, don’t take my nitpicking as a reason not to look at Altaro VM Backup. Instead, keep in mind that these issues exist.
In actuality most of these issues are not big problems. A GOOD backup administrator always checks their backups first thing every morning in order to fix any issues right then and there. Right?! I know that is what I did when it was my job. When I have my consultant hat on, however, I simply want to set it and forget it. The Altaro VM Backup is almost there in that regard. 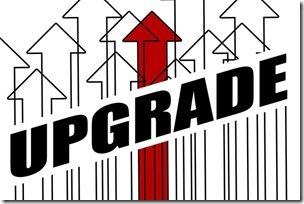 How to Upgrade to the Latest Altaro VM Backup 7.6

I was going to do step-by-step screenshots of the setup, but there isn’t much to it. Honestly, it was a next, next, next, type of thing until I received a warning message that I needed to uninstall the old version. I uninstalled the old version and then installed the latest version. The whole process takes about 10 minutes. In my case, it may have taken longer because I manually shutdown each VM and rebooted the server in between uninstall and reinstall, but I probably didn’t need to do that. As a precaution I always like to reboot in order to make things cleaner. In the end, the upgrade process was so simple it wasn’t worth documenting.
If you have any additional questions about Altaro VM Backup, please feel free to contact me @GarthMJ.