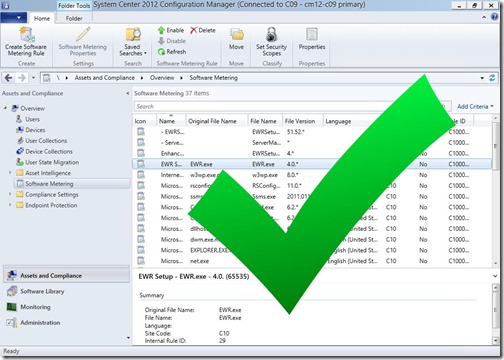 In a previous blog post entitled, “Total Usage for All Metered Software Programs Query Matches the Executable Name,”. Reporting will show results for Disabled Software Metering Rules rules. I closed off that blog post by saying that this was in fact a good thing. So let me explain why it is a good thing and then I will go into more detail about each point below.

1. Fewer active rules needed.
2. Capture new versions or languages without the need for a new rule.
3. You can get creative with your reporting.

I do a lot of work for international clients. They generally worry about multiple versions of software which could include several different language versions. In the past, if I wanted to ensure that I collected details for Microsoft Project from a client who uses both English and French language versions. I would need to create a separate rule for each version and language.

You can imagine how many rules I would need to create if an organization used more than two languages, and employed several versions of a diverse group of products. However, without creating these rules, I would not be able to report on each version and the version’s language. About 100 SWM is the maximum you can have. In order to prevent hitting that limit, use generic rules. By using only one active generic rule for all versions and languages then you could create reports about 100 different products.

However, generic SWM rule will ignores versions and languages when SWM data is returned. This is a good thing as it means we could create a disabled rule for Microsoft Project Greek. Therefore, be able to report on it right away, instead of waiting to get results! When Microsoft Project 2013 is installed this is true. You could gather results right away instead of waiting until you noticed the new version.

You Can Get Creative With Your Reporting

In both examples above there is no need for extra SWM rules. However when it comes to reporting, disabled SWM rules truly shine.

· You can use the disabled rules to display data from the built-in reports. Similar to what I did within my first blog post. Since you are collecting data for all versions and all languages. Create a disabled SWM rules for each new version or language is installed in your environment. Any SWM rule will show results immediately.

· You can leverage the disabled rules within your own custom reports.

By creating disabled rules and leveraging them within reports. You reduce the need for Managers and Asset Managers to manually gather data about individual versions and languages on each product for their own reporting purposes.

I hope that you see how using Disabled Software Metering Rules rules can be an advantage to you and your organization!