hummmm maybe this is not a bad idea. 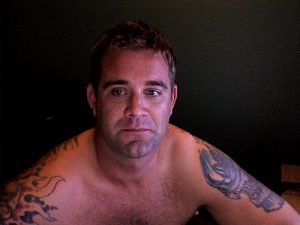 “Last week a number of computers were stolen from our office in Vancouver, BC. One of those computers was a shared iMac with Flickrbooth, an app that automatically uploads photo booth shots to our flickr account, installed on it. Just this morning a friend called to tell us that there are photos of whoever has the computer now in our flickr stream! Obviously the guy didn’t know he was uploading images of himself and his awesome tattoos. “

Here’s a link to the shots on the company’s flickr account. Do you know who this guy is? The theft victims and the Vancouver police would love to hear about it. Looks like the SomethingAwful forums are all over the case, too.

Update: A gem in the comments thread: “There should be a word for this, thinking you’re getting away with something on the sly while the world laughs at you, anticipating your inevitable demise — schadendouche?” [beatnik]

And looks like there are more security cam photos of this man here, and video here.

And a clarification: we don’t know for a fact that the guy in these photos is the thief, that’s for the legal system to decide. It is possible that he is simply an innocent new owner of a previously pilfered laptop or laptops.