“We have a dog in the house again, and this one is finally ours to keep. Yesterday we brought home a four-year-old Labrador Retreiver (black of course). She’s a country girl, and has lived all her life so far in the Lanark Highlands with lots of room to play, lots of playmates and a river to swim in, so there will be some adjusting to being in a one-dog household in the suburbs. She’s pretty laid back, so she seems to be settling in so far. She’s actually a retired show dog (Cdn. CH Hunterleigh’s Mrs. McNabb) so she has spent some time “off the farm”. The origin of her name is that she was born on Superbowl Sunday 2005. Apparently she is only called “Mrs. McNabb” when she’s in trouble; the rest of the time she is “McNabby” or just “Nabby” for short.

Garth is already saying that he has been replaced 🙂 but it will be nice to have a dog around again, especially when he’s away, and it will be even more incentive to go for our walks.” 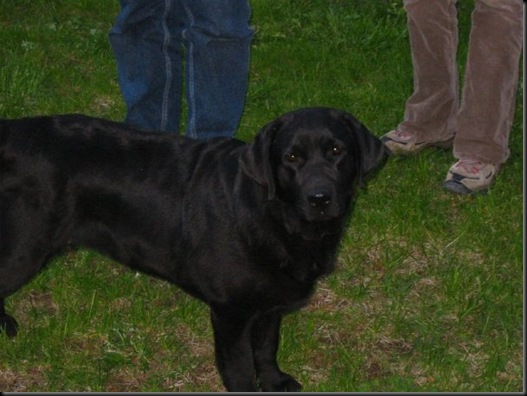